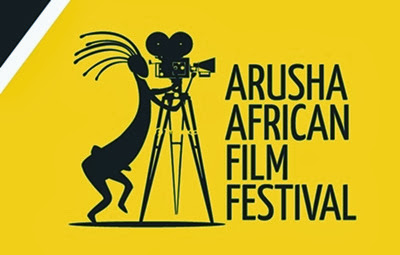 Posted by Kwanzaa Cards at 8:50 PM No comments:

"black is the nite (Round the World)" a stop motion animation by Pamela Sunstrum on exhibit at MoCADA
Just a few weeks ago I was writing about fractals as part of a post about a piano concert featuring Debussy’s La Mer. Wouldn’t you know it, they’ve cropped up again.
An exhibit opening this weekend at the Museum of Contemporary African Diasporan Arts (MoCADA) in Brooklyn - with ties to Rensselaer - will feature several fractal-based works. The exhibit is titled “Feed Your Head: The African Origins of the Scientific Aesthetic,” and, according to the description on the MoCADA website, the works featured  “join together two visual artists with a physicist and ethnomathematician to explore the aesthetic convergence of science and art.”
The ethnomathematician is none other than Rensselaer Professor Ron Eglash. Eglash, a professor in our Department of Science and Technology Studies, has made fractals a keystone in his efforts to show minority students the cultural relevance of the STEM (science, technology, engineering and mathematics) fields.
Here’s how Eglash summarizes his work:

Fractals are patterns that repeat themselves across several scales. They were first thought to be purely mathematical abstractions, but in the 1970s mathematician Benoit Mandelbrot realized that many natural structures have this “scaling” characteristic: trees are branches of branches, rugged mountains have peaks within peaks, clouds are puffs of puffs, and so on. Fractals became an exciting new frontier for mathematical models of nature.
In the late 1980s I noticed that aerial photos of African villages also tend to be fractals: circular houses in circles of circles; rectangular houses in rectangular clusters. A Fulbright research fellowship allowed me to spend a year travelling in Africa interviewing the artisans who created these structures. I found that these patterns were intentional and that the repeating process of shrinking scales— what mathematicians call “recursion”—often symbolized recursive cosmologies, the infinite regression of kinship, the self-generating power of life, or other concepts that mapped fractals to spiritual and social ideas. Fractals showed up not only in African architecture, but also in African textiles, sculpture, hairstyles, metalwork, and many other designs.
Thanks to funding from the National Science Foundation, we have developed educational software that allows K-12 teachers to use these African fractals in the classroom (www.csdt.rpi.edu). Architects working in Africa have also started to look at fractal structure for contemporary buildings, and there is even an entire university campus planned for Angola which will have a fractal layout.

As for the project, Eglash said:

We began our discussion with a focus on the work of Sylvester Gates, who has been visualizing his supersymmetry theory with some diagrams he calls “adinkra,” after the Ghanaian print tradition. I described some of the work I had been doing on adinkra in Ghana, and Kalia Brooks, the curator, suggested we make adinkra the central theme.
A few months later Taena Richards contacted me and asked about an adinkra symbol she had seen called “linked hearts.”

Eglash says this pattern is slightly different from a traditional Ghanaian adinkra pattern (in which the hearts would be more circular, reflecting the actual shape of an animal heart). Nevertheless, he used her version as the basis for a fractal which he returned to her:

The finished piece is a collaboration between Eglash, theoretical physicist Sylvester  Gates, and artists Pamela Sunstrum and Richardson (full disclosure – “black is the nite (Round the World) ” - the image of which opens this post - is not one of the pieces on which he collaborated, although it will be featured in the exhibit).
As part of the exhibit, on December 6, MoCADA will offer a workshop for educators on using African arts to teach STEM, run by Rensselaer Professor Audrey Bennett.
The exhibit will be on view November 17, 2011 to February 25, 2012.
ShareThis
Tagged as: fractals, MoCADA, rensselaer polytechnic institute, Ron Eglash, STEM
Posted by Kwanzaa Cards at 6:45 PM No comments:

Visit NBCNews.com for breaking news, world news, and news about the economy
Posted by Kwanzaa Cards at 8:41 AM No comments:

Posted by Kwanzaa Cards at 8:42 PM No comments:

Redefining Black Power: Reflections on the State of Black America


The Pacifica Radio Archives' first book project, out February 15th, 2012. Join the conversation on the African American experience during the Obama presidency on Thursday February 2nd at Eso Won Books in Los Angeles.


For more details go to www.redefiningblackpower.com


Barack Obama made history in 2008 when he became the nation's first African American president. His victory stood on the shoulders of black freedom fighters throughout history, but what has his presence meant for black America as we march towards the 2012 presidential election?

Posted by Kwanzaa Cards at 3:48 PM No comments:

"Sankofa" means don't be afraid to go back and get what you don't remember...For Kwanzaa and year around...from Spirit Dance Adornments http://spiritdanceadornments.blogspot.com. Take a look at some of the other Adinkra inspired "Talking Adornments." 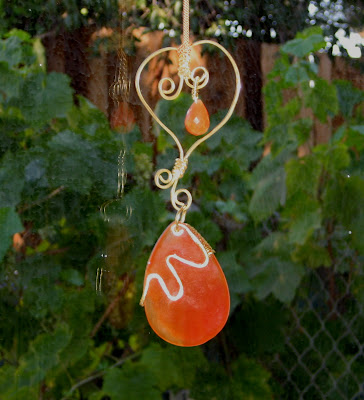 In this image the camera's light setting wasn't quite right, but the I'm including it because it best captures the sun lighting up the carnelian. The entire piece is made up of a carnelian ----- and a carnelian briolette from Turquoise Magpie, suspended from a brass frame. My client is going to hang it in her window. I call this piece Sankofa. It will make a gorgeous window and room display.

In the Adinkra African writing system of the Akan people of and Corte ‘d Ivorie there is for me one symbol that recognize more than any other that life is transformational. That symbol isSankofa.

Of all of the intrepretaions I found regarding the concept of Sankofa, this text from W.E.B. DuBois Learning Center has resonance for me:
"se wo were fi na wosan kofa a yenki."
"it is not taboo to go back and fetch what you forgot". 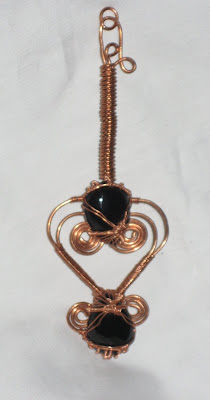 The Akan Symbol Project at Marshal University
expands on the ideas of memory and knowledge with the following;

The Akan believes that knowledge must have practical bearing on the conduct of life. This is portrayed by the aphorism:

Nyansa nye sika na woakyekyere asie -
Wisdom is not like money which may be kept in a safe;
or,
". . .one does not collect wisdom in a bag,
lock it up in a box
and then go to say to a friend,
"teach me something."

This secondSankofa piece is a pendant
of onyx and copper.

The idea I'm trying to work on is --our futures are not shackled by our past but given flight by knowledge of the past. Because the symbol is interpreted as two birds

or one bird flying in two directions
or a bird and an egg.

I see the concept of Sankofa as speaking to the multiple identities we wear, the multiple paths we can and do choose to travel and as a result the multiple possibilities we have when we allow ourselves to hear and see the past and the future from the position we exist in today.

Here are a few more images I’ve used to inform my work with wire and gemstones. I love the stylization of these image.

Posted by Kwanzaa Cards at 10:04 AM No comments:

Wear a piece of history...Africancowboys on T-shirts, mugs and mouse pads


Browse other personalized gifts from Zazzle.
Posted by Kwanzaa Cards at 11:34 PM No comments:

Kawazza Cards allow you to send your greetings on-line

deliver a hard copy by mail carrier to the mailbox of the person you want to remember.

$.99 will deliver an electronic card to the email inbox of someone special.

For $1.99 you can download one of our cards and print it on your printer or attach it to as many emails as you desire.

Cards for All Seasons